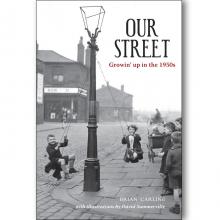 It must be stated at the outset that this is NOT a history book, but a short book (it’s only 122 pages long) based on memories of growing up in the 1950’s in a northern industrial town. Ostensibly it is set in the City of Salford in Copenhagen Street, a street ‘no different from any street in any large industrial town or city in the 1950’s.’1 It describes a street and its residents – in many ways reminiscent of Granada’s early Coronation Street setting, in fact there is a Fairclough and a Barlow family. There are many references to Salford landmarks and buildings (not totally accurately, for instance it was the Cattle Market at the top of Cross Lane not the Flat Iron Market and the Seaman’s Mission was on Trafford Road opposite the docks not on Cross Lane), notwithstanding that caveat there are many references to local Salford locations and institutions which add to the warmth generated by the book.

The descriptions of the various resident of Copenhagen Street vary from hilarious to the thought provoking.

An example of the former there is the description of the laying out and funeral of the late Mr. Hennessey whose family lived at Number 4. To Mrs. Hennessey’s compliment on how well the deceased looked the undertaker Mr Meredith, replied ‘I you’d have let me put his teeth in I could have made him look as if he were smilin’. To which Mrs. Hennessey commented ‘No, he was quite clear about that, he wanted to leave ‘em to Walter Pridmore…..He’d barely had six months use out of them…’2

Similarly, the chapter on Mrs. Anderton at number 8 and her job as an usherette at the Central Cinema is also hilarious and this writer can say from youthful memory and experience fairly accurate!

However the book is not all laugh out loud, the chapter on the Barlow family at Number 17 describes the life of a mill girl – Ida Barlow from her introduction to the mill at the age of fourteen with her two sisters starting work at 7 a.m. and finishing at 5 p.m. (one hour for lunch and a ten minute tea break in the morning). Here is described the working conditions, the incessant noise, the cotton dust and the health problems suffered by the workers. The chapter goes on to mention the terrible contaminating atmosphere in Salford prior to the 1956 Clean Air Act as well as Ida’s life, marriage and final death at the age of fifty-nine years.

All in all, a book that while not totally accurate or indeed factual, evokes in a highly readable manner way the people of a northern industrial town lived, their home life, working lives and their social lives in the ten to fifteen years that followed the Second World War. This reviewer for one thoroughly enjoyed it.