Never Heard of Her! 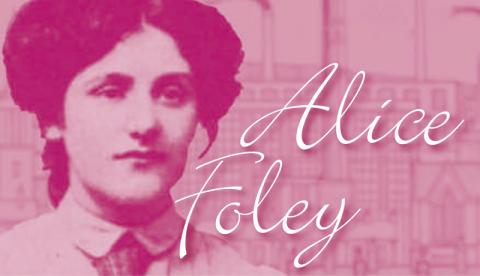 Women’s History Month is about giving recognition to women who history has ‘forgotten’. Alice Foley was the first full-time women General Secretary of a Textile Union, a true pioneer. Her long struggle to attain this position, and her work on behalf of textile workers, has been bypassed by Labour historians.

Alice was born in Bolton in 1891 into extreme poverty. She was the sixth child of an Irish Catholic father who was often without work who became a violent drunk. However, he did read works from Dickens, Shakespeare and other classics to the family so developing Alice’s love of literature and learning. Her mother was a Bolton woman who was not able to read or write. She was the mainstay of the family, steadfast and strong, earning what she could as a washerwoman.

Alice attended school until she was thirteen. She loved to read. The library was important - both to read in and to borrow books. In many ways Alice was self-taught. Then she started work at the Mill. For seven years, she worked doing different jobs and experiencing the harshness and long hours of mill work. From the start she became involved in her union, the Bolton & District Weavers and Winders Association. Her work as a Trade Unionist never wavered from this time

In 1912 she was employed by the Union as a full-time sick visitor under the 1911 National Insurance Act. Her job was to cycle around Bolton with a money bag to pay out sick pay and pensions to Union members. She also had to assess people for the benefit. In the Union Office she was the sole woman only too aware of the men’s attitude to her. She has written that she was ‘tolerated rather than accepted’.

The union’s Associated General Secretary resigned in 1917. Alice was asked to cover the job until a replacement was found She was given the title of Temporary Clerk with no increase in pay.

Months later the job was advertised. Three women and five men were called to the interview where they were asked to take part in a test. The result of the test was never published. However, it became known that one person had scored 72%, and that the nearest to this score was 32%. Alice was certain that she had obtained the highest mark but no one was appointed. Once again Alice was expected to continue doing the AGS job. This time she was given the title Union Women Officer. In 1919 the post was advertised again – this time with the proviso that ‘only men need apply’. This in a union where women were approximately ¾ of the membership!

Alice stayed as the Union Women Officer until 1949 when she finally became the first woman General Secretary of Bolton Weavers and Winders. It had taken her more than thirty years to obtain due recognition. During this time, she had won many battles for her fellow mill workers, including being part of the negotiating team that won the first paid holidays for Lancashire textile workers, reduced working hours for Bolton Weavers, increased wages and much more.

The NWLH society can give a performance about Alice’s early life based on her autobiography ‘A Bolton Childhood’. For further information, contact jamesjrees@googlemail.com